Soaring housing prices in Vancouver and Toronto continued to squeeze housing affordability at the national level in the second quarter, even though affordability was close to historical norms in most other Canadian markets, according to the Housing Trends and Affordability Report issued today by RBC Economics Research.

Housing affordability is calculated as a share of household income, so a higher number means housing is less affordable.

In Calgary, RBC’s second-quarter affordability measure was well below the long-term average for the area. Saint John and St. John’s posted mild improvements in housing affordability and Halifax also stood out for its attractive affordability level. 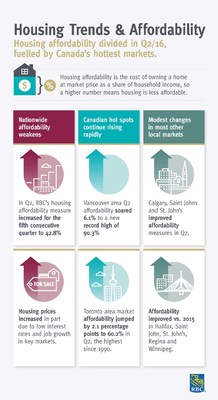 In the Vancouver area, property values have ballooned by more than 30 per cent in the past year. Home resales were already on a downward track before the British Columbia government introduced a 15 per cent tax on home purchases by foreign nationals in Metro Vancouver, and area resales could see further significant weakness in the near term if there is a sharp downgrading of future price expectations and a drop in speculative activity.

“Signs of cooling resale activity have emerged in Vancouver and more tentatively in Toronto and we believe the blistering pace of property appreciation in both markets may slow by year end,” said Craig Wright, RBC chief economist. “This likely won’t help affordability in the near-term because of demand-supply tightness in the two markets at the present time, but some relief could arrive late this year or early in 2017.”

More details about provincial and regional housing figures can be found in the attached fact sheet. 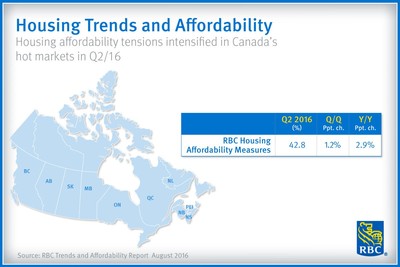 Fifty-six per cent of Canadians would switch insurers to save $150.

World’s only Ski-Thru ATM returns with a “twist”