While eight out of 10 Canadian parents claim they have a good understanding of the costs associated with a post-secondary education, a new CIBC poll finds that almost 75 per cent don’t really seem to grasp the actual cost of tuition. What’s more, almost 40 per cent admit they don’t know what to budget for their children’s non-tuition costs, such as books, accommodation and living expenses. 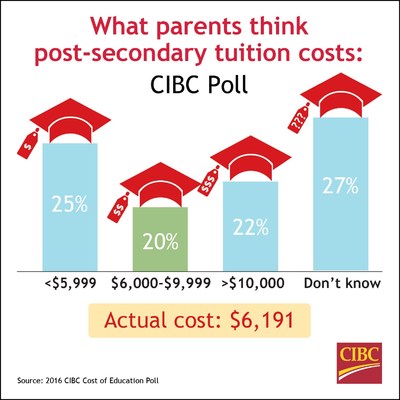 The poll finds that most parents are unaware of the real costs of their children’s post-secondary education. It’s stressful when you don’t know if you are on the right track or not. Have I saved too much, too little or just enough? Many parents think they know what to expect, but end up being surprised at the true cost. That makes it hard to budget and build a savings plan.

With parents not really knowing what the costs are, it’s not surprising that so many students end up treating their parents like ATMs once they’re in school.

A CIBC poll in August 2015 found that more than half of post-secondary students tapped their parents for additional financial support while at school because they ran out of money.

The poll also finds that 39 per cent of parents with children enrolled or recently graduated say it cost them more than expected, while almost half (46 per cent) said in hindsight, they should have started saving earlier.

“When you’re looking at a total cost over four years of at least $100,000 for one child who goes away to college or university, that’s a major investment ahead,” says Ms. Woodard. “It’s important to prioritize financial obligations – be it saving for a child’s education, paying down the mortgage, saving for retirement, going on a family vacation or buying a cottage – and that’s where expert advice can really help from how to budget and find savings to investing your money prudently.”

While 76 per cent of parents saving for their children’s post-secondary school education have set up a Registered Education Savings Plan (RESP), many lack fundamental knowledge about RESPs:

“It’s never too late to start contributing to a RESP,” says Ms. Woodard. “Even if you skip a year or five years of putting money into the RESP, there are opportunities to benefit from the government grant. It’s certainly money that you don’t want to leave on the table. That extra $500 grant per year might be the difference of whether your child works part-time during school or can focus solely on their studies.”

Here are five hacks for parents:

1.    Start early
2.    RESP contributions can be made until children reach age 31
3.    Explore all government grants – Federal and various provincial governments have incentives for education savings that are administered through RESPs.
4.    Set financial priorities & map out how to achieve them
5.    Talk to a qualified expert  – know the RESP rules, limits, over contribution penalties and map out an investing and withdrawal strategy.