Consumers – the driving force of growth in 2017

Canada’s economy regained momentum in the second half of 2016 and is poised to see sustained growth throughout 2017 according to the latest RBC Economic Outlook report. The RBC forecast calls for real Gross Domestic Product (GDP) growth of 1.3 per cent in 2016, 1.8 per cent in 2017 and 2.1 per cent in 2018.

“The Canadian consumer drove growth again in 2016,” said Craig Wright, senior vice-president and chief economist at RBC. “Despite falling energy investment and the Alberta wildfires weighing on the economy, strong consumer spending and housing market activity supported growth in 2016. In 2017, a bounce-back in energy investment and anticipated fiscal stimulus are expected to provide a further boost.” 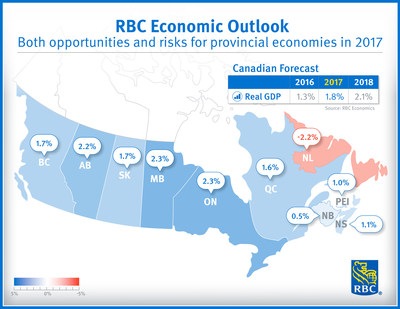 Despite a year of surprises and uncertainty around the world, favourable conditions for Canadian consumers and a robust housing market led the economy forward. Consumer spending in 2016 has increased 2.2 per cent, while home sales rose 4.4 per cent with average prices jumping 9.5 per cent. While the sources of economic strength are expected to shift in 2017, the net impact will be continued forward momentum in the Canadian economy.

Although core inflation is likely to top the Bank of Canada’s 2 per cent target, RBC expects the Canadian central bank will hold the overnight rate steady throughout 2017 with the first rate hike expected to come in 2018.

Business investment to offset declining housing market in 2017
Regulatory changes from at both the federal and provincial levels are expected to slow the pace of new home building, home-resale activity and housing price increases across the country in 2017. RBC forecasts an 11.5 per cent decline in home resales in 2017 with price increases slowing to 1.6 per cent.

Conversely, business investment, which has been sluggish over the past two years, will inch higher. An expected recovery in energy prices should lead to a modest rise in investment from energy companies with additional increases in investment by service-sector companies and exporters.

Consumers remain in the driver’s seat
Disposable income will continue to grow in 2017, supported by job gains and changes to the federal Canada Child Benefit that came into effect on July 1, 2016.

Canadian dollar finds stability amid contrasting forces
Volatility in oil prices and uncertainty about monetary policy in 2016 contributed to a seesaw in the Canadian dollar. In 2017, two contrasting forces will vie for influence: rising oil prices will exert positive pressure on the dollar, while tighter monetary policy in the U.S. is expected to have the opposite effect. As a result, RBC forecasts a mild overall depreciation in currency in 2017 to 72.5 U.S. cents.

Provincial growth to become more uniform across Canada
As global energy markets enter a recovery phase in 2017, a turnaround in oil-producing provincial economies is expected to provide more uniform growth performance across Canada. Barring any unexpected adverse events, RBC forecasts modest to moderate growth for all provincial economies in 2017, except Newfoundland and Labrador where a drop in capital investment and persistent fiscal austerity are anticipated to cause a further contraction.

Stimulus, spending and investment to accelerate U.S. growth in 2017
The U.S. economy is on track to post a 1.6 per cent increase in 2016 driven largely by consumer spending and a gain in residential construction. In 2017, a recovery in business investment will supplement continued growth in consumer spending. Employment gains and wage increases will strengthen consumption and support a pickup in the housing market. Anticipated fiscal stimulus from the incoming administration will further add to the momentum, with growth forecasted at 2.3 percent in 2017.

A complete copy of the RBC Economic and Financial Market Outlook is now available. A separate RBC Economics Provincial Outlook assesses the provinces according to economic gains, employment growth, unemployment rates, retail sales, housing starts and consumer price indices. A summary of each province’s economic outlook can be found in this fact sheet.

Majority of Canadians Not Doing Much Research When Buying Financial Products