Even though there have been some signs of economic improvement over the past year, most employed Canadians, especially those in B.C., are no better off when it comes to their retirement prospects.

According to the Canadian Payroll Association’s ninth annual survey, released today, 47% of working Canadians report it would be difficult to meet their financial obligations if their pay cheque was delayed by even a single week. The numbers are even higher for millennials in their 30s (55% would have difficulty) and Gen Xs in their 40s (51%). In B.C., 59% live pay cheque to pay cheque, more than anywhere else in Canada.

The survey also shows that 41% of employees nationally, and 49% in B.C., spend all of or more than their net pay. The number-one reason given for increased spending is higher living costs.

Forty-two per cent of survey respondents (and 46% in B.C.) said they save 5% or less of their earnings, below the 10% savings level generally recommended by financial planning experts.

Illustrating just how strapped some employees are, 22% (nearly 1 in 4) say they could not come up with just $2,000 within a month for an emergency expense. Twenty-six percent of B.C. employees would struggle to come up with $2,000. 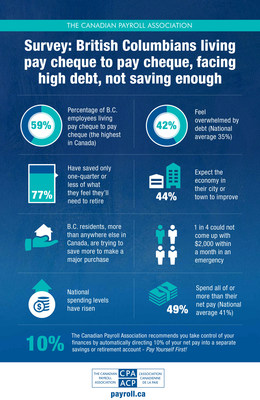 Nearly one-third (31%) of respondents nationally say their debt load increased over the year, while 33% of British Columbians have increased their debt. Canada-wide, those who believe it will take more than 10 years to pay down their debt has risen to 42% (versus 36% in 2016). Fully 12% believe they will never be debt free.

As in past years, 94% of Canadians carry debt, with the most common debt being mortgages (28%), credit cards (17%), car loans (18%) and lines of credit (17%). Not surprisingly, given the high cost of real-estate in some areas, more respondents than ever find mortgages on principal residences the most difficult debt to pay down, with 32% of respondents selecting this option. For the first time in the survey’s nine year history, mortgages surpassed credit card debt (23%) as the most difficult to pay down. B.C. residents, more than anywhere else nationally, indicate they are trying to save more to make a major purchase (28% vs. 22% nationally).

Results indicate that the primary reason for increased debt is higher overall spending. The major reasons for increased spending are higher living expenses (32%) and unexpected expenses (25%). Despite their precarious financial situation, 26% of working Canadians feel that earning more is their best way to financial well-being, versus just 19% who think spending less is the ticket to financial security.

“Although many B.C. employees are saving to make a major purchase, these results also underscore the need for spending less and saving more every day, for emergencies and for retirement,” says Janice MacLellan, the Canadian Payroll Association’s Vice-President of Operations. “They also show that it is very difficult for people to change or reduce their spending patterns. By Paying Yourself First through automatic payroll deductions, you are diverting money into a retirement or savings account before you have the opportunity to think about spending it.”

Retirement Delayed for Many

Almost half of working Canadians (46%) say they will now have to work longer than they planned five years ago, and the top reason cited is they are “not saving enough”.

Canada-wide, there were a few positive indicators, most notably a 5% increase in the number of employees with total household incomes of over $125K, and a slight rise (2%) in full time employment to 89%.

However, most working Canadians see little to cheer about, with only 39% expecting the economy in their city or town to improve. While up 3% over last year, it is down by 27% from the first survey done in 2009. British Columbians are optimistic about their local economy, with 44% believing their local economy will improve.

With many Canadians challenged by debt, cost of living worries, and insufficient retirement savings, the Canadian Payroll Association recommends you Pay Yourself First by saving 10% of your net pay.

If you want to learn more about automatic savings – and how you can Pay Yourself First – talk to your payroll professional.

“The Canadian Payroll Association’s Research Survey of Employed Canadians is conducted each year to support National Payroll Week,” says Frank Lilley, CPA, CGA and Chair of the Canadian Payroll Association’s Board of Directors. “National Payroll Week recognizes the contributions of payroll professionals in delivering $928 billion annually in wages and benefits on behalf of employers and in helping Canadians Pay Themselves First.”

Canadian Payroll Association spokespersons are available across Canada for interviews.

Canadian Payroll Association 2017 Survey of Employed Canadians
A total of 4,766 employees from across Canada, and from a wide range of industry sectors, responded to an online research survey between Monday, June 27th, 2017 and Friday, August 5th, 2017, using a convenience sampling methodology. The survey was developed by the Canadian Payroll Association and conducted by Framework Partners. The survey is consistent with a margin of error of plus or minus 1.3% 19 times out of 20, but as a non-probabilistic methodology was used, a definitive margin of error cannot be expressed.

Payroll Professionals – Keeping Canada Paid™
Canada’s 1.5 million employers rely on payroll practitioners to ensure the timely and accurate annual payment of $928 billion in wages, $313 billion in statutory remittances to the federal and provincial governments, and $177 billion in health and retirement benefits, while complying with more than 200 federal and provincial regulatory requirements. Since 1978, the Canadian Payroll Association has annually influenced the payroll compliance practices and processes of over five hundred thousand organizational payrolls. As the authoritative source of Canadian payroll knowledge, the Canadian Payroll Association promotes payroll compliance through education and advocacy.

Students head back to school worried about their job prospects

Canadians’ Number One Financial Priority is to Reduce or Eliminate Debt