The proportion of Canadians who are $200 or less away from financial insolvency at month-end has jumped a significant six points since September, from 40 per cent to 46 per cent, according to the latest MNP Consumer Debt Index conducted by Ipsos. Three in ten (31%) Canadians indicate that they don’t make enough to cover their bills and debt payments, an increase of seven points over the same period.

“Our research continues to highlight the fact that many Canadians don’t have enough in the budget to make ends meet, let alone address their underlying indebtedness,” says Grant Bazian, President of the country’s largest insolvency firm, MNP Ltd.

Nearly half (45%) of Canadians say they will not be able to cover all living and family expenses in the next year without going into further debt. Less than four in ten say they are confident in their ability to cope financially if an unexpected life-changing event were to occur.

“Higher interest rates combined with household expenses that outweigh income mean that some are unable to make any kind of meaningful reduction in their debt and, in fact, continue to take on more especially if they encounter unexpected expenses,” he says.

The number of Canadians who say they are feeling the effects of interest rate increases jumped six points since the last wave to 51 percent. Moreover, four in ten (41%) Canadians say that they are not only concerned about their current level of debt, but regret the amount of debt they have taken on (43%).

“Many have so little wiggle room that any increase in living costs or interest payments can tip them over the edge. That’s what we are seeing happen right now,” he says.

Bazian’s team of over 70 Licensed Insolvency Trustees across the country have seen a significant increase in the number of indebted Canadians requesting help with their debt.

“For most, the cause of trouble appears to be long term accumulated debt. It may have been acquired over many years and they managed to pay the monthly interest until now. They just can’t carry it any longer at higher interest rates,” he says.

More than half (51%) of Canadians are concerned about the impact of rising interest rates on their financial situation. Significantly more Canadians are worried about their ability to repay debts (57%; +5pts) and believe they could be in financial trouble (50%; +5pts) if rates continue to rise. Just about four in ten (39%) are concerned that rising interest rates could move them toward bankruptcy, up five points since September.

Some of the concern Canadians feel stems from a lack of financial literacy and awareness about the debt help available, according to Bazian.

“There is a system in place to give those who are severely in debt the help they need to achieve financial stability. It is important to ask for help from a licensed professional to help determine the best debt relief option,” says Bazian.

A Licensed Insolvency Trustee has extensive knowledge of governing legislation and is empowered to help debtors make the most informed choices to deal with their debt. They are the only federally regulated professionals who can provide regulated insolvency options, such as a consumer proposals and bankruptcies.

Other MNP Consumer Index highlights include: 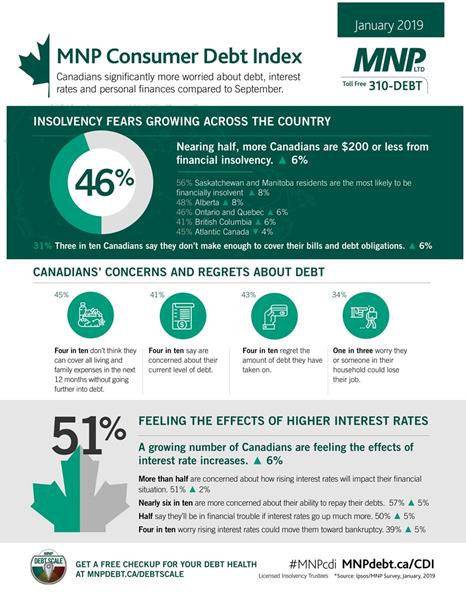 CIBC Poll: For eighth straight year, Canadians say paying down debt is their top financial priority in the coming year

Canadians’ Number One Financial Priority is to Reduce or Eliminate Debt